Let’s talk about the ABC’s. No, we’re not going back to grammar school but we’ll explore one of the three western-most islands of the Leeward Antilles in the Caribbean Sea just north of Falcón State, Venezuela. The ABC islands are Aruba, Bonaire, and Curaçao. One of my favorites in that portion of the alphabet is Curacao.

Curaçao is 40 miles off the Venezuelan coast, therefore lots of people from the Netherlands travel to Curacao.

It’s a former Dutch colony where Caribbean, African, Latin, and European culture mix together to form a colorful mosaic. One of the most iconic images of Curacao is its multi-colored architecture. Rumor has it, the founder of Curacao disliked plain white buildings because they gave him migraines. He ordered builders to only paint structures in an array of colors, thus no headaches! As you approach Curacao by air or sea, you’ll quickly notice the colorful buildings. Ahhhhh!

The capital city, Willemstad, has more than 750 historic buildings with colonial architecture and it was designated a UNESCO world heritage site. I traveled to Curacao in April and the weather was unbelievable. You can definitely get good deals on flights because that’s what we’re always looking for!

The history of Curacao would not be complete without the significant story of the Avila Beach Hotel. The Avila Beach Hotel is the oldest operational hotel on Curacao. It opened as Avila in 1949. Before it was a hotel it was a governor’s home, boys boarding school, and a private clinic.  (The hotel’s founder Doctor Gungu Maal named the property after the medieval Spanish town, Avila).

The hotel has about 150 rooms and apartments in 3 unique wings or sections, each with a different accomodation style. Octagon is modern; there’s a Caribbean Ocean Front Blues wing with awesome views, and there’s a section called La Belle Alliance.

I stayed in a room atop an observation tower surrounded by the Caribbean Sea! The hotel has two private beaches protected from the wind and waves. This great location makes the beaches ideal where small children and families can enjoy the turquoise waters.

You’ve got to experience Avila Beach’s restaurant and jazz nightclub called Blues the next time you’re in Curacao. The musicians perform on a stage that’s suspended from the ceiling! The food is incredible with mostly local or traditional menu items, and the great thing is that the food comes with unique stories of how each dish was created. At Avila Beach’s restaurant known as The Pen, I had a cheese dish called Keshi Yena that was invented by African slaves. They couldn’t afford the better part of the cheese so as a result, they used cheese rinds and mixed them with meat. It’s Curacao’s signature dish.

One of the best things about Avila is the hotel gives back to a local orphanage. I packed school supplies with me and donated them to the school.

Hear more about my trip to Curacao in my radio segment with Randy Sharman of The Informed Traveler and be sure to watch our Curacao segment featuring Avila Beach Hotel. 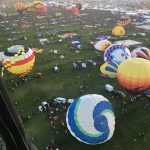 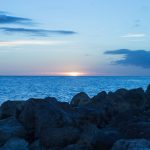 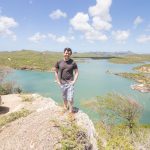 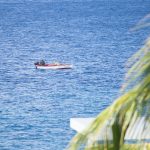 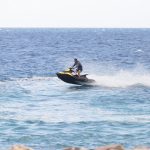 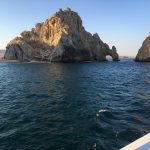 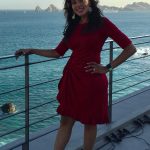 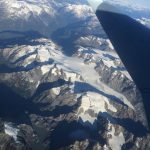